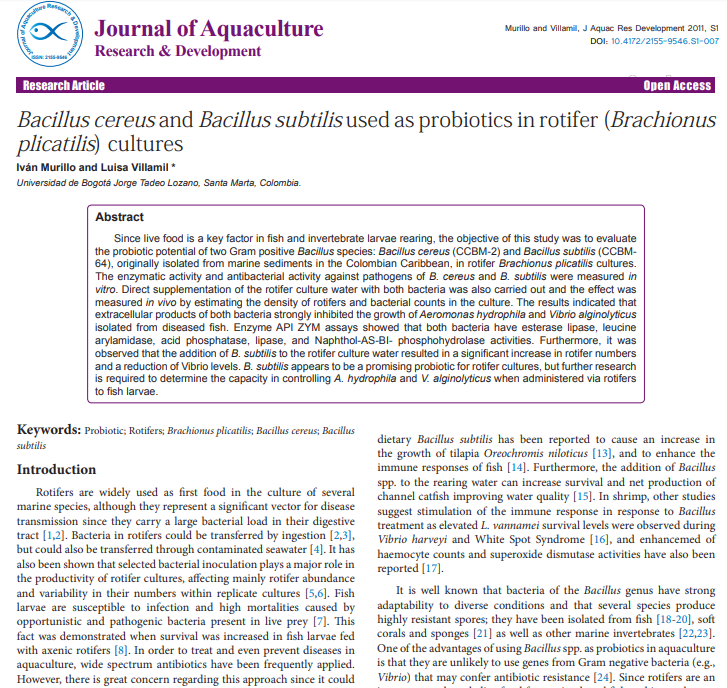 Since live food is a key factor in fish and invertebrate larvae rearing, the objective of this study was to evaluate the probiotic potential of two Gram positive Bacillus species: Bacillus cereus (CCBM-2) and Bacillus subtilis (CCBM64), originally isolated from marine sediments in the Colombian Caribbean, in rotifer Brachionus plicatilis cultures. The enzymatic activity and antibacterial activity against pathogens of B. cereus and B. subtilis were measured in vitro. Direct supplementation of the rotifer culture water with both bacteria was also carried out and the effect was measured in vivo by estimating the density of rotifers and bacterial counts in the culture. The results indicated that extracellular products of both bacteria strongly inhibited the growth of Aeromonas hydrophila and Vibrio alginolyticus isolated from diseased fish. Enzyme API ZYM assays showed that both bacteria have esterase lipase, leucine arylamidase, acid phosphatase, lipase, and Naphthol-AS-BI- phosphohydrolase activities. Furthermore, it was observed that the addition of B. subtilis to the rotifer culture water resulted in a significant increase in rotifer numbers and a reduction of Vibrio levels. B. subtilis appears to be a promising probiotic for rotifer cultures, but further research is required to determine the capacity in controlling A. hydrophila and V. alginolyticus when administered via rotifers to fish larvae.