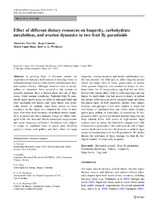 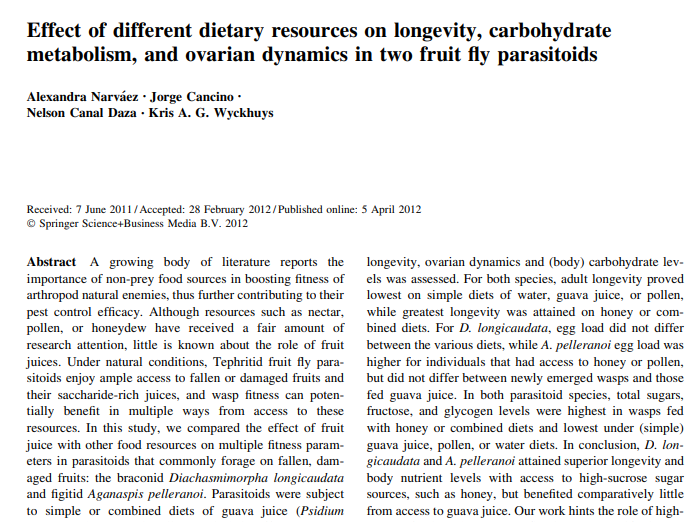 A growing body of literature reports the importance of non-prey food sources in boosting fitness of arthropod natural enemies, thus further contributing to their pest control efficacy. Although resources such as nectar, pollen, or honeydew have received a fair amount of research attention, little is known about the role of fruit juices. Under natural conditions, Tephritid fruit fly parasitoids enjoy ample access to fallen or damaged fruits and their saccharide-rich juices, and wasp fitness can potentially benefit in multiple ways from access to these resources. In this study, we compared the effect of fruit juice with other food resources on multiple fitness parameters in parasitoids that commonly forage on fallen, damaged fruits: the braconid Diachasmimorpha longicaudata and figitid Aganaspis pelleranoi. Parasitoids were subject to simple or combined diets of guava juice (Psidium guajava), honey and pollen, and their effect on wasp longevity, ovarian dynamics and (body) carbohydrate levels was assessed. For both species, adult longevity proved lowest on simple diets of water, guava juice, or pollen, while greatest longevity was attained on honey or combined diets. For D. longicaudata, egg load did not differ between the various diets, while A. pelleranoi egg load was higher for individuals that had access to honey or pollen, but did not differ between newly emerged wasps and those fed guava juice. In both parasitoid species, total sugars, fructose, and glycogen levels were highest in wasps fed with honey or combined diets and lowest under (simple) guava juice, pollen, or water diets. In conclusion, D. longicaudata and A. pelleranoi attained superior longevity and body nutrient levels with access to high-sucrose sugar sources, such as honey, but benefited comparatively little from access to guava juice. Our work hints the role of highsucrose foods such as (extra-) floral nectar or artifical sugar sprays in boosting fitness of fruit fly parasitoids. We further discuss the relevance of these findings for fruit fly biological control, in crops such as guava.