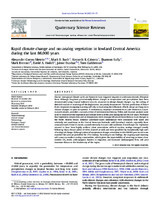 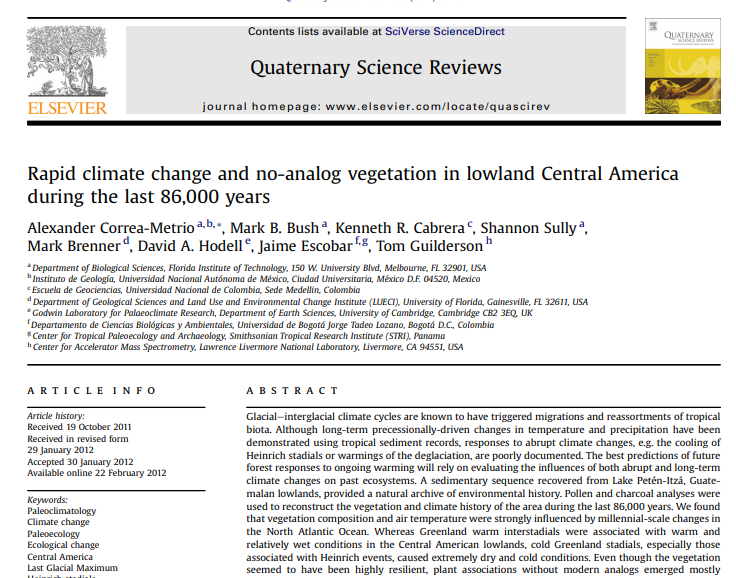 Glacialeinterglacial climate cycles are known to have triggered migrations and reassortments of tropical biota. Although long-term precessionally-driven changes in temperature and precipitation have been demonstrated using tropical sediment records, responses to abrupt climate changes, e.g. the cooling of Heinrich stadials or warmings of the deglaciation, are poorly documented. The best predictions of future forest responses to ongoing warming will rely on evaluating the influences of both abrupt and long-term climate changes on past ecosystems. A sedimentary sequence recovered from Lake Petén-Itzá, Guatemalan lowlands, provided a natural archive of environmental history. Pollen and charcoal analyses were used to reconstruct the vegetation and climate history of the area during the last 86,000 years. We found that vegetation composition and air temperature were strongly influenced by millennial-scale changes in the North Atlantic Ocean. Whereas Greenland warm interstadials were associated with warm and relatively wet conditions in the Central American lowlands, cold Greenland stadials, especially those associated with Heinrich events, caused extremely dry and cold conditions. Even though the vegetation seemed to have been highly resilient, plant associations without modern analogs emerged mostly following sharp climate pulses of either warmth or cold, and were paralleled by exceptionally high rates of ecological change. Although pulses of temperature change are evident in this 86,000-year record none matched the rates projected for the 21st Century. According to our findings, the ongoing rapid warming will cause no-modern-analog communities, which given the improbability of returning to lower-thanmodern CO2 levels, anthropogenic barriers to migration, and increased anthropogenic fires, will pose immense threats to the biodiversity of the region.