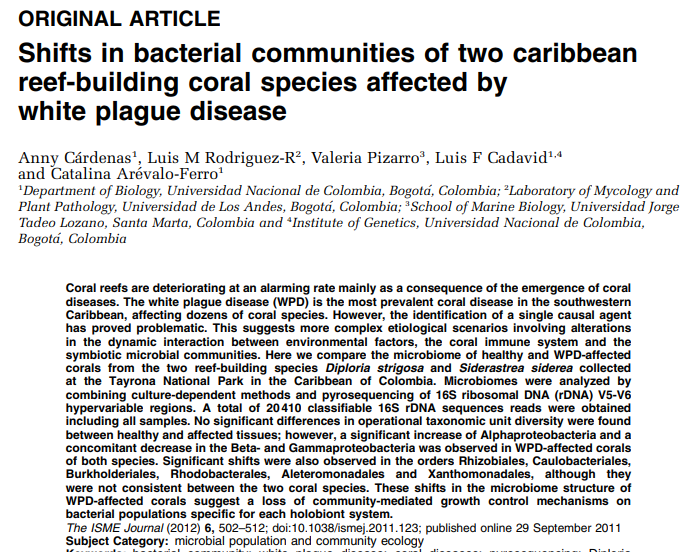 Coral reefs are deteriorating at an alarming rate mainly as a consequence of the emergence of coral diseases. The white plague disease (WPD) is the most prevalent coral disease in the southwestern Caribbean, affecting dozens of coral species. However, the identification of a single causal agent has proved problematic. This suggests more complex etiological scenarios involving alterations in the dynamic interaction between environmental factors, the coral immune system and the symbiotic microbial communities. Here we compare the microbiome of healthy and WPD-affected corals from the two reef-building species Diploria strigosa and Siderastrea siderea collected at the Tayrona National Park in the Caribbean of Colombia. Microbiomes were analyzed by combining culture-dependent methods and pyrosequencing of 16S ribosomal DNA (rDNA) V5-V6 hypervariable regions. A total of 20 410 classifiable 16S rDNA sequences reads were obtained including all samples. No significant differences in operational taxonomic unit diversity were found between healthy and affected tissues; however, a significant increase of Alphaproteobacteria and a concomitant decrease in the Beta- and Gammaproteobacteria was observed in WPD-affected corals of both species. Significant shifts were also observed in the orders Rhizobiales, Caulobacteriales, Burkholderiales, Rhodobacterales, Aleteromonadales and Xanthomonadales, although they were not consistent between the two coral species. These shifts in the microbiome structure of WPD-affected corals suggest a loss of community-mediated growth control mechanisms on bacterial populations specific for each holobiont system.