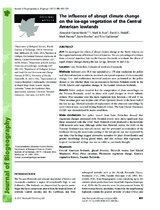 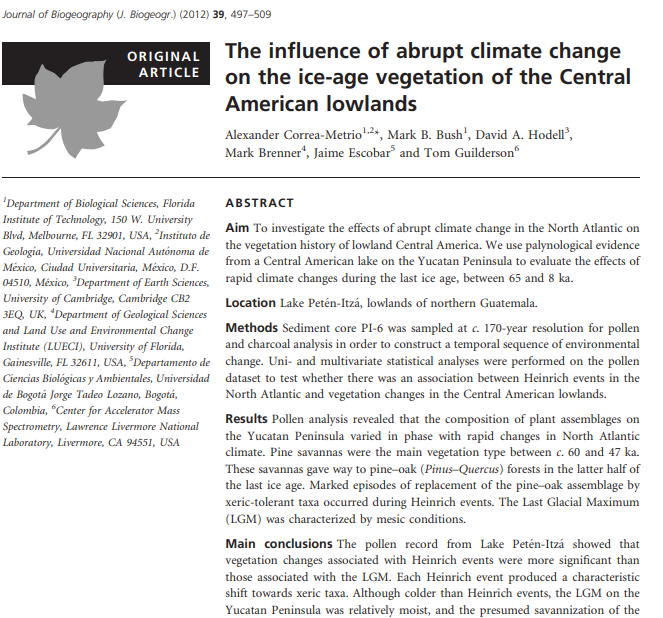 Aim To investigate the effects of abrupt climate change in the North Atlantic on the vegetation history of lowland Central America. We use palynological evidence from a Central American lake on the Yucatan Peninsula to evaluate the effects of rapid climate changes during the last ice age, between 65 and 8 ka. Location Lake Pete´n-Itza´, lowlands of northern Guatemala. Methods Sediment core PI-6 was sampled at c. 170-year resolution for pollen and charcoal analysis in order to construct a temporal sequence of environmental change. Uni- and multivariate statistical analyses were performed on the pollen dataset to test whether there was an association between Heinrich events in the North Atlantic and vegetation changes in the Central American lowlands. Results Pollen analysis revealed that the composition of plant assemblages on the Yucatan Peninsula varied in phase with rapid changes in North Atlantic climate. Pine savannas were the main vegetation type between c. 60 and 47 ka. These savannas gave way to pine–oak (Pinus–Quercus) forests in the latter half of the last ice age. Marked episodes of replacement of the pine–oak assemblage by xeric-tolerant taxa occurred during Heinrich events. The Last Glacial Maximum (LGM) was characterized by mesic conditions. Main conclusions The pollen record from Lake Pete´n-Itza´ showed that vegetation changes associated with Heinrich events were more significant than those associated with the LGM. Each Heinrich event produced a characteristic shift towards xeric taxa. Although colder than Heinrich events, the LGM on the Yucatan Peninsula was relatively moist, and the presumed savannization of the landscape during the maximum cooling of the last glacial was not supported by our data. Our findings suggest alternative scenarios for plant diversification and genetic interchange during glacial times, and also indicate that vegetation in tropical continental settings was not as stable as previously thought.