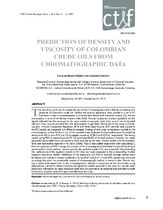 The aim of our work was to analyze the use of Gas Chromatographic (GC) data for correlating bulk properties of Colombian crude oils. Multivariate statistics regressions were applied on a set of 57 Colombian crude oil chromatograms to correlate both density and kinematic viscosity (Vk); this last one property in terms of the Refutas viscosity index (V50). Principal component analysis applied to the GC signals indicated that the responses for the more volatile compounds, which elute up to 5 min of recorded retention times, can be excluded from the data analysis to get better distribution of the score and loading plots. Principal Component Regression (PCR) and Partial Least Squares (PLS) methods were applied to the GC signals pre-processed with different strategies. Strategy of total area normalization applied on the chromatograms without the first 5 min of the recorded times produced the best performance for predicting density and V50 in both PCR and PLS (strategies named as PCR2-5 and PLS2-5, respectively). The density models using PLS2-5 required just one PC for explaining 88,6% of the total variance. However, this model generated appreciable errors compared to those reported by the Near Infrared models and the reproducibility and repeatability reported in the ASTM D5002. PLS2-5 also yielded large errors when calculating Vk from the regression of V50. Through the inclusion of the chromatographic Distillable Fraction (DF) and some mathematical transformations, the accuracy for the predictive model of Vk was improved. Notwithstanding this, performance of the regression based on GC data was lower compared to the corresponding Nuclear Magnetic Resonance models. Validations of the regressions with PLS2-5 reported average relative errors for density and kinematic viscosity (predicted in terms of DF*Ln(Vk)) of 1,4 and 29%, respectively, which are surprisingly low given the appreciable amount of chromatographic residue in several crudes. Despite having a higher experimental error in the chromatographic method in comparison to that found when using spectroscopic method in chemo-chemistry, the regression models proposed in this work can provide useful preliminary information for assay evaluation and have the potential to be improved and extended to crude oil fractions using the same FID signal recorded from the crude.