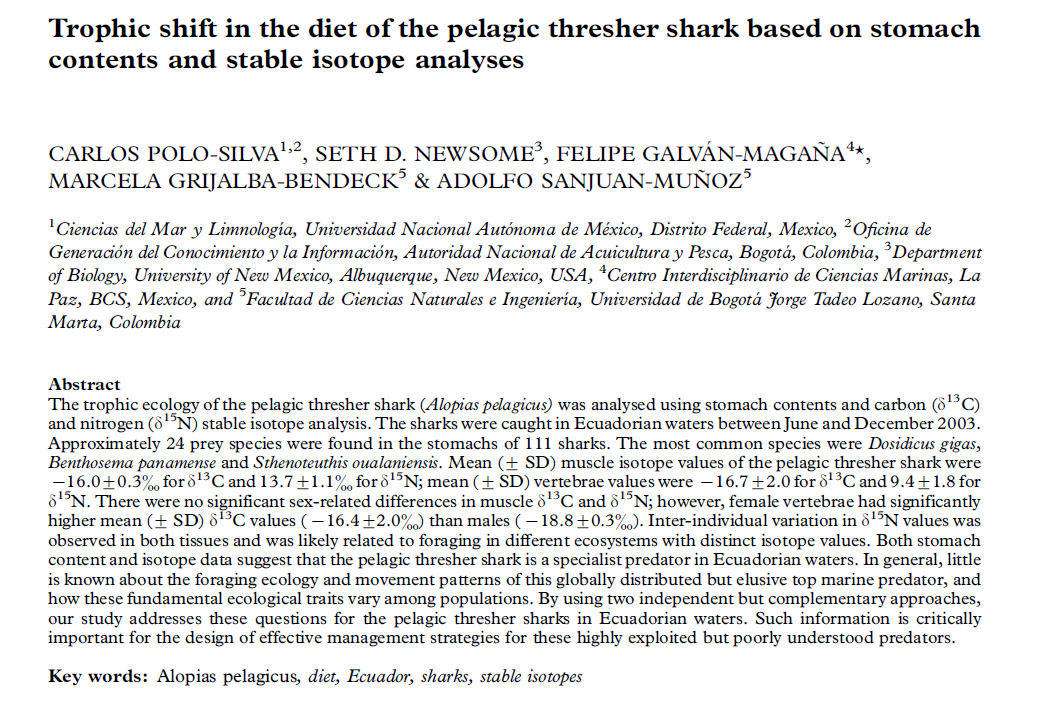 The trophic ecology of the pelagic thresher shark (Alopias pelagicus) was analysed using stomach contents and carbon (d13C) and nitrogen (d15N) stable isotope analysis. The sharks were caught in Ecuadorian waters between June and December 2003. Approximately 24 prey species were found in the stomachs of 111 sharks. The most common species were Dosidicus gigas, Benthosema panamense and Sthenoteuthis oualaniensis. Mean (9SD) muscle isotope values of the pelagic thresher shark were 16.090.3 for d13Cand 13.791.1 for d15N; mean (9SD) vertebrae valueswere 16.792.0 for d13Cand 9.491.8 for d15N. There were no significant sex-related differences in muscle d13C and d15N; however, female vertebrae had significantly higher mean (9SD) d13C values ( 16.492.0 ) than males ( 18.890.3 ). Inter-individual variation in d15N values was observed in both tissues and was likely related to foraging in different ecosystems with distinct isotope values. Both stomach content and isotope data suggest that the pelagic thresher shark is a specialist predator in Ecuadorian waters. In general, little is known about the foraging ecology and movement patterns of this globally distributed but elusive top marine predator, and how these fundamental ecological traits vary among populations. By using two independent but complementary approaches, our study addresses these questions for the pelagic thresher sharks in Ecuadorian waters. Such information is critically important for the design of effective management strategies for these highly exploited but poorly understood predators.