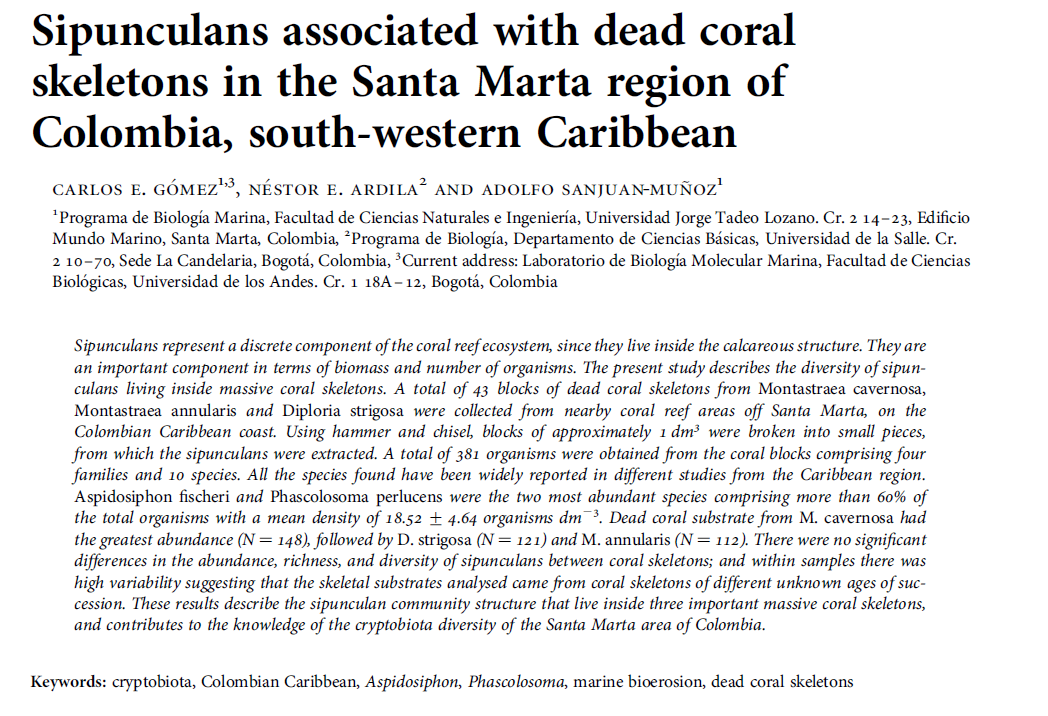 Sipunculans represent a discrete component of the coral reef ecosystem, since they live inside the calcareous structure. They are an important component in terms of biomass and number of organisms. The present study describes the diversity of sipunculans living inside massive coral skeletons. A total of 43 blocks of dead coral skeletons from Montastraea cavernosa, Montastraea annularis and Diploria strigosa were collected from nearby coral reef areas off Santa Marta, on the Colombian Caribbean coast. Using hammer and chisel, blocks of approximately 1 dm3 were broken into small pieces, from which the sipunculans were extracted. A total of 381 organisms were obtained from the coral blocks comprising four families and 10 species. All the species found have been widely reported in different studies from the Caribbean region. Aspidosiphon fischeri and Phascolosoma perlucens were the two most abundant species comprising more than 60% of the total organisms with a mean density of 18.52+4.64 organisms dm23. Dead coral substrate from M. cavernosa had the greatest abundance (N ¼ 148), followed by D. strigosa (N ¼ 121) and M. annularis (N ¼ 112). There were no significant differences in the abundance, richness, and diversity of sipunculans between coral skeletons; and within samples there was high variability suggesting that the skeletal substrates analysed came from coral skeletons of different unknown ages of succession. These results describe the sipunculan community structure that live inside three important massive coral skeletons, and contributes to the knowledge of the cryptobiota diversity of the Santa Marta area of Colombia.