Is the appeal of the doctrine of double effect illusory? 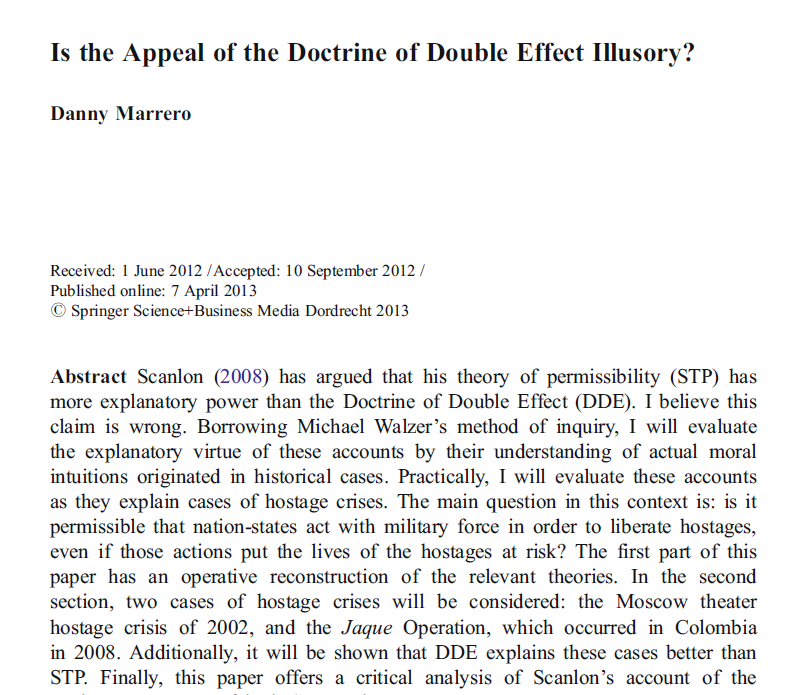 Scanlon (2008) has argued that his theory of permissibility (STP) has more explanatory power than the Doctrine of Double Effect (DDE). I believe this claim is wrong. Borrowing Michael Walzer’s method of inquiry, I will evaluate the explanatory virtue of these accounts by their understanding of actual moral intuitions originated in historical cases. Practically, I will evaluate these accounts as they explain cases of hostage crises. The main question in this context is: is it permissible that nation-states act with military force in order to liberate hostages, even if those actions put the lives of the hostages at risk? The first part of this paper has an operative reconstruction of the relevant theories. In the second section, two cases of hostage crises will be considered: the Moscow theater hostage crisis of 2002, and the Jaque Operation, which occurred in Colombia in 2008. Additionally, it will be shown that DDE explains these cases better than STP. Finally, this paper offers a critical analysis of Scanlon’s account of the explanatory power of both STP and DDE.