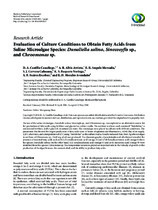 The use of the saline microalgae, Dunaliella salina, Sinecosyfis sp., and Chroomonas sp., was explored as an alternative source for the production of fatty acids using fertilizer and glycerol as culture media. The nutrient medium used contained “Nutrifoliar,” a commercial fertilizer, and/or glycerol, in natural sea water.The microalgae were placed in cultures with different conditions. The parameters that favored the largest production of fatty acids were 24 hours of agitation and illumination, 1620 L/day of air supply, 2.25 L of air/min, and a temperature of 32∘C using “Nutrifoliar” as the culture media. Results indicated that, from 3 g of microalgae in wet base of Chroomonas sp., 54.43mg of oil was produced. The chromatographic characterization of oil obtained revealed the presence of essential fatty acids such as 9,12,15-octadecatrienoic acid (omega-3) and 4,7,10-hexadecatrienoic acid (omega-6) from the species Dunaliella salina. On the other hand, 9,12-octadecadienoic acid (omega-6) and cis-11-eicosenoic acid (omega-9) were identified from the species Chroomonas sp. The temperature variations played an important role in the velocity of growth or the production of the algae biomass, the amount of oil, and the ability to produce fatty acids.