Social expenditure as a factor that promotes greater dependence on the vat. analysis of the colombian case 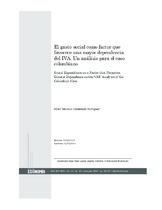 This paper, through a Colombian case study, suggests that the public social expenditure helps increase the contribution that indirect taxes such as VAT has on revenue, not only due to the fiscal effort its funding requires, but also because of the compensation effect for taxpayers, particularly for those with a lower income. Evidence on the structure determinants and tax pressure using data for the 1970-2010 period is also presented, its temporal dependence is highlighted and the effect of adopted tax reforms is considered.