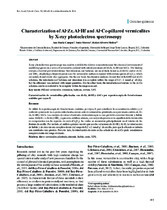 X-ray photoelectron spectroscopy was used to establish the relative concentration and the chemical environment of modifying species in a series of vermiculites pillared with mixed precursors of Al-Zr, Al-Hf and Al-Ce. The binding energies observed provided evidence that zirconium and hafnium are most likely found as Zr-O(H)- and/or Zr-Si- and HfO2, displaying a larger dispersion on the vermiculite surface compared with cerium species (Ce2O3), which are mainly found inside clay aggregates. On the one hand, the chemical analysis showed that with Al-Hf and Al-Zr solutions, the introduction of hafnium and zirconium was complete within the range of 0.5 - 2 mmol g-1 of clay, but the efficiency was reduced with larger quantities. On the other hand, the introduction of cerium in the Al-Ce solutions can be considered to be complete within the range assessed.