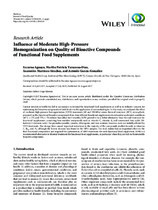 Current interest in health has led to an increase in demand for functional food supplements as well as in industry concern for maintaining the bioactive compounds of such foods via the application of new technologies. In this study, we evaluated the effect of moderate high-pressure homogenization (HPH) treatments (80 and 120MPa) versus thermal treatment (80∘C, atmospheric pressure) on the functional bioactive compounds from four different functional supplements stored under accelerated conditions (40∘C ± 2∘C and 75% ± 5% relative humidity) for 6 months. HPH proved to be a better alternative than thermal treatment for functional supplements containing heat-sensitive compounds such as vitamin C, vitamin A, and unsaturated fatty acids (10- hydroxy-2-decenoic acid).The proanthocyanidin, cynarin, chlorogenic, and iron contents, however, were not initially affected by HPH treatments. The storage time caused important reductions in the majority of the compounds studied (mainly in vitamins C, B12, and A), although the lowest decrease was found in the HPH samples. The food matrix had an important effect on the final functional composition and required the optimization of HPH treatments for each functional food supplement. HPH is a recommended alternative to thermal treatment for functional food supplements, in particular when they are rich in thermolabile bioactive compounds.