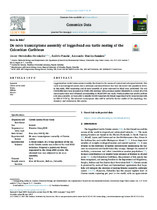 Loggerhead sea turtle Caretta caretta is widely distributed in the oceans of tropical and subtropical latitude. This turtle is an endangered species due to anthropic and natural factors that have decreased their population levels. In this study, RNA sequencing and de-novo assembly of genes expressed in blood were performed. The raw FASTQ files have been deposited on NCBI's SRA database with accession number SRX2629512. A total of 5.4 Gb raw sequence data were obtained, corresponding to 48,257,019 raw reads. Trinity pipeline was used to perform a de-novo assembly, we were able to identify 64,930 transcripts for female loggerhead turtle transcriptome with an N50 of 1131 bp. The obtained transcriptome data will be useful for further studies of the physiology, biochemistry and evolution in this species.