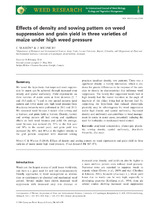 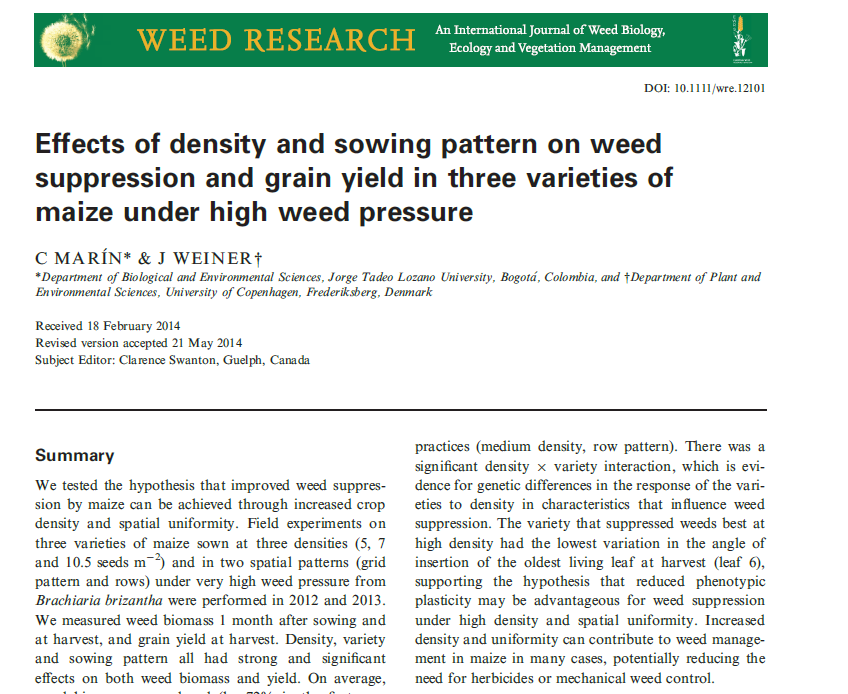 We tested the hypothesis that improved weed suppression by maize can be achieved through increased crop density and spatial uniformity. Field experiments on three varieties of maize sown at three densities (5, 7 and 10.5 seeds m 2) and in two spatial patterns (grid pattern and rows) under very high weed pressure from Brachiaria brizantha were performed in 2012 and 2013. We measured weed biomass 1 month after sowing and at harvest, and grain yield at harvest. Density, variety and sowing pattern all had strong and significant effects on both weed biomass and yield. On average, weed biomass was reduced (by 72% in the first year and 58% in the second year), and grain yield was increased (by 48% and 44%) at the highest density in the grid pattern compared with standard sowing practices (medium density, row pattern). There was a significant density 9 variety interaction, which is evidence for genetic differences in the response of the varieties to density in characteristics that influence weed suppression. The variety that suppressed weeds best at high density had the lowest variation in the angle of insertion of the oldest living leaf at harvest (leaf 6), supporting the hypothesis that reduced phenotypic plasticity may be advantageous for weed suppression under high density and spatial uniformity. Increased density and uniformity can contribute to weed management in maize in many cases, potentially reducing the need for herbicides or mechanical weed control.