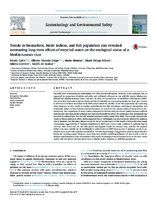 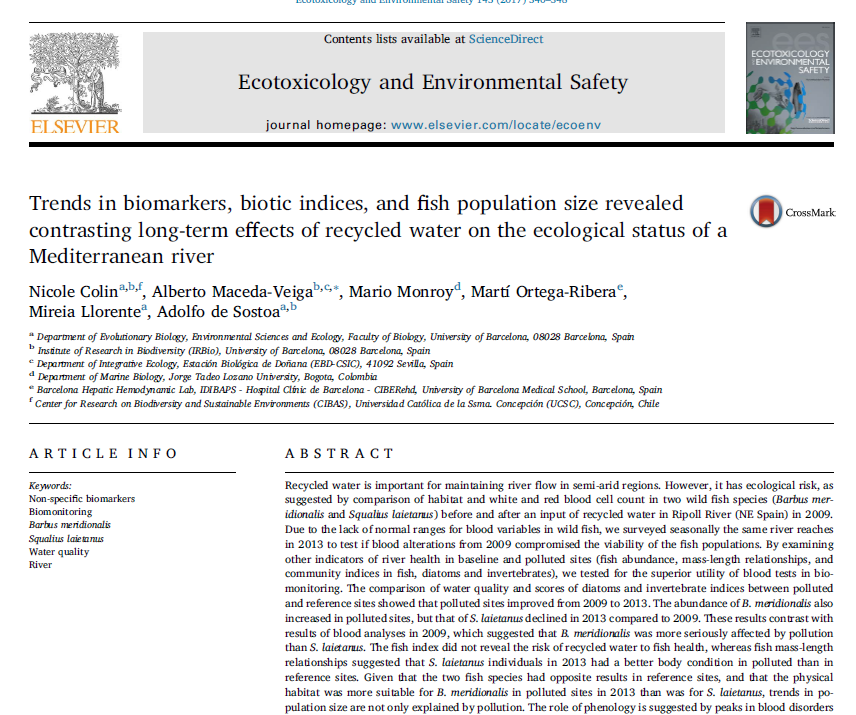 Recycled water is important for maintaining river flow in semi-arid regions. However, it has ecological risk, as suggested by comparison of habitat and white and red blood cell count in two wild fish species (Barbus meridionalis and Squalius laietanus) before and after an input of recycled water in Ripoll River (NE Spain) in 2009. Due to the lack of normal ranges for blood variables in wild fish, we surveyed seasonally the same river reaches in 2013 to test if blood alterations from 2009 compromised the viability of the fish populations. By examining other indicators of river health in baseline and polluted sites (fish abundance, mass-length relationships, and community indices in fish, diatoms and invertebrates), we tested for the superior utility of blood tests in biomonitoring. The comparison of water quality and scores of diatoms and invertebrate indices between polluted and reference sites showed that polluted sites improved from 2009 to 2013. The abundance of B. meridionalis also increased in polluted sites, but that of S. laietanus declined in 2013 compared to 2009. These results contrast with results of blood analyses in 2009, which suggested that B. meridionalis was more seriously affected by pollution than S. laietanus. The fish index did not reveal the risk of recycled water to fish health, whereas fish mass-length relationships suggested that S. laietanus individuals in 2013 had a better body condition in polluted than in reference sites. Given that the two fish species had opposite results in reference sites, and that the physical habitat was more suitable for B. meridionalis in polluted sites in 2013 than was for S. laietanus, trends in population size are not only explained by pollution. The role of phenology is suggested by peaks in blood disorders during the breeding season. However, more long-term studies combining indicators of river health at the individual and community scales are needed to fully assess the ecological risk of recycled water in this river. These studies will also help to develop blood tests as reliable health indicators in wild fish populations.