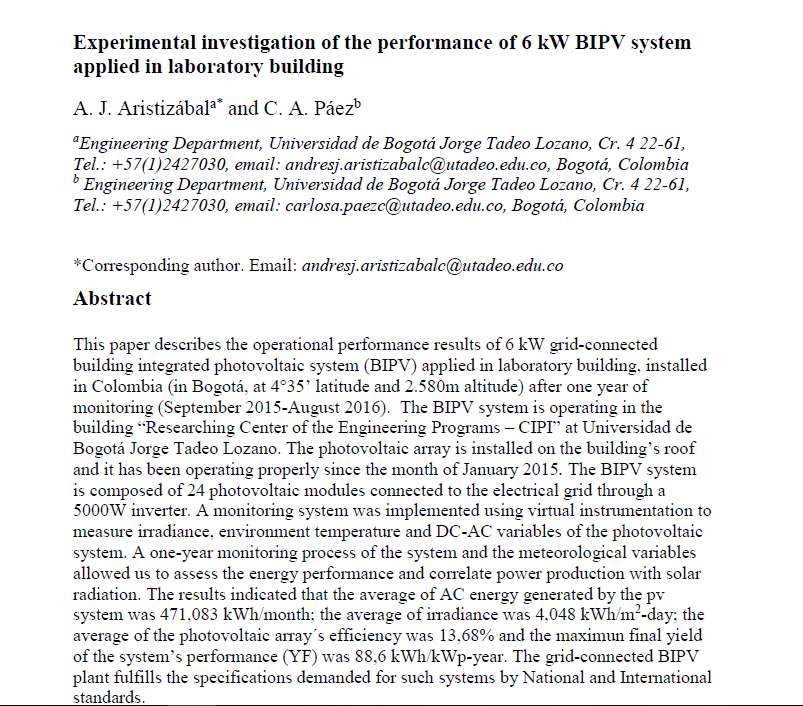 This paper describes the operational performance results of 6 kW grid-connected building integrated photovoltaic system (BIPV) applied in laboratory building, installed in Colombia (in Bogotá, at 4°35’ latitude and 2.580m altitude) after one year of monitoring (September 2015-August 2016). The BIPV system is operating in the building “Researching Center of the Engineering Programs – CIPI” at Universidad de Bogotá Jorge Tadeo Lozano. The photovoltaic array is installed on the building’s roof and it has been operating properly since the month of January 2015. The BIPV system is composed of 24 photovoltaic modules connected to the electrical grid through a 5000W inverter. A monitoring system was implemented using virtual instrumentation to measure irradiance, environment temperature and DC-AC variables of the photovoltaic system. A one-year monitoring process of the system and the meteorological variables allowed us to assess the energy performance and correlate power production with solar radiation. The results indicated that the average of AC energy generated by the pv system was 471,083 kWh/month; the average of irradiance was 4,048 kWh/m2-day; the average of the photovoltaic array´s efficiency was 13,68% and the maximun final yield of the system’s performance (YF) was 88,6 kWh/kWp-year. The grid-connected BIPV plant fulfills the specifications demanded for such systems by National and International standards.