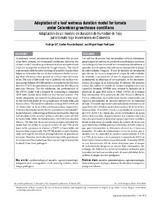 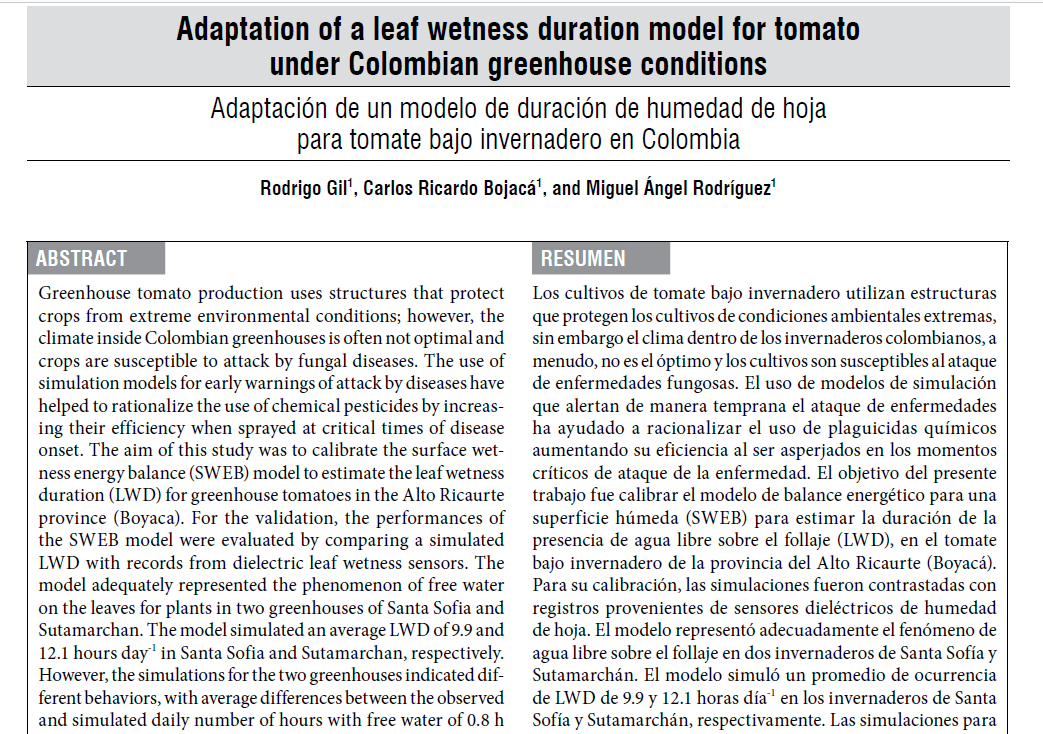 Greenhouse tomato production uses structures that protect crops from extreme environmental conditions; however, the climate inside Colombian greenhouses is often not optimal and crops are susceptible to attack by fungal diseases. The use of simulation models for early warnings of attack by diseases have helped to rationalize the use of chemical pesticides by increasing their efficiency when sprayed at critical times of disease onset. The aim of this study was to calibrate the surface wetness energy balance (SWEB) model to estimate the leaf wetness duration (LWD) for greenhouse tomatoes in the Alto Ricaurte province (Boyaca). For the validation, the performances of the SWEB model were evaluated by comparing a simulated LWD with records from dielectric leaf wetness sensors. The model adequately represented the phenomenon of free water on the leaves for plants in two greenhouses of Santa Sofia and Sutamarchan. The model simulated an average LWD of 9.9 and 12.1 hours day-1 in Santa Sofia and Sutamarchan, respectively. However, the simulations for the two greenhouses indicated different behaviors, with average differences between the observed and simulated daily number of hours with free water of 0.8 h for Santa Sofia, while, for Sutamarchan, the difference reached 4 hours. The fraction of correct estimates index indicated the model had the ability to correctly predict 92 and 72% of the hours with a presence or absence of LWD in Santa Sofia and Sutamarchan, respectively. The SWEB model is a useful tool for early warnings for the attack of fungal diseases in greenhouse tomatoes. However, due to the shortcomings of the greenhouse structures used for production, the crops are highly susceptible to attack from these pathogens.