Ecology and conservation of sea turtles in Chile 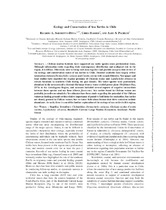 Chilean marine habitats have supported sea turtle species since prehistorical times. Although information exists regarding their contemporary distribution and ecological role in the region, it is diffuse. This study aims to bring such data together and provide an up-to-date review of the ecology and conservation status of sea turtles in Chile. Detailed available data largely reflect interactions between Dermochelys coriacea and Caretta caretta with oceanic fisheries. Newspaper and local studies have reported the regular presence of Chelonia mydas and Lepidochelys olivacea in certain locations in northern Chile during the past decade. The latter species were particularly abundant in the area around a thermal discharge from a water-cooled power plant (Mejillones Bay, 236S) in the Antofagasta Region, and accounts included several reports of negative interactions between these species and sea lions (Otaria flavescens). Sea turtles found in Chilean waters are probably juveniles or subadults. No estimates have been made regarding the potential of the Chilean waters as feeding grounds or the relative importance of putative food items for sea turtles. Sea turtles are clearly present in Chilean waters, but we know little about factors that drive variation in their abundance. As such, there is a need for further exploration of the ecology of sea turtles in this region.