Spatio-temporal patterns of the international merger and acquisition network 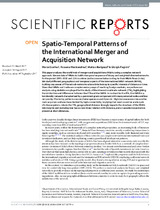 This paper analyses the world web of mergers and acquisitions (M&As) using a complex network approach. We use data of M&As to build a temporal sequence of binary and weighted-directed networks for the period 1995–2010 and 224 countries (nodes) connected according to their M&As flows (links). We study different geographical and temporal aspects of the international M&A network (IMAN), building sequences of filtered sub-networks whose links belong to specific intervals of distance or time. Given that M&As and trade are complementary ways of reaching foreign markets, we perform our analysis using statistics employed for the study of the international trade network (ITN), highlighting the similarities and differences between the ITN and the IMAN. In contrast to the ITN, the IMAN is a low density network characterized by a persistent giant component with many external nodes and low reciprocity. Clustering patterns are very heterogeneous and dynamic. High-income economies are the main acquirers and are characterized by high connectivity, implying that most countries are targets of a few acquirers. Like in the ITN, geographical distance strongly impacts the structure of the IMAN: link-weights and node degrees have a non-linear relation with distance, and an assortative pattern is present at short distances.