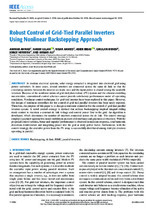 In modern electrical systems, solar energy extracted is integrated into electrical grid using power converters. In most cases, several inverters are connected across the same dc link so that the circulating currents between the inverter are made zero and the input power is shared among the available inverters. Because of the nonlinear nature of grid-tied photovoltaic (PV) system and the inherent modeling uncertainties, conventional control schemes cannot provide satisfactory performances under all operating conditions. Nonlinear control techniques for grid-tied inverter have been explored in this paper. However, the design of nonlinear controllers for the control of grid-tied parallel inverters has been rarely reported. Therefore, the purpose of this paper is to design a nonlinear controller for the control of grid-tied parallel inverter system. A novel control strategy is devised that utilizes backstepping inspired integral sliding mode control to maintain a constant dc link voltage and control power ow to the grid. An algorithm is developed, which determines the number of inverters connected across the dc link. The control strategy employs Lyapunov approach to ensure stability in an event of disturbance and guarantees robustness.With the proposed control scheme, better and superior performance is observed in transient response, total harmonic distortion minimization and integrating power into the grid at unity power factor. Furthermore, with the control strategy, the available power from the PV array is successfully distributed among multiple inverters operating in parallel.