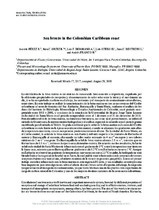 Circulation of sea breeze is a well-known and important mesoscale system, boosted by different properties of reception and storage of solar heat between land and sea during one day, and its effect on waves, currents, and transport of atmospheric contaminants, among others, has been proven. The aim of this work is to characterize sea breeze in three coastal zones of the Colombian Caribbean, in the north of South America: Riohacha, Barranquilla, and Santa Marta, through the analysis of data from the Instituto de Hidrología, Meteorología y Estudios Ambientales (Hydrology, Meteorology and Environmental Studies Institute) of Colombia during the period 1981-2008, and a detail analysis in the city of Santa Marta with data from the station of the Jorge Tadeo Lozano University of Bogotá in the period January 1st to December 31, 2010. Gustavsson´s method was used to identify the marine breeze cycle, its duration, frequency, and hourly pattern; hodograph representation and spectral analysis were performed according to the periodogram modified by the Welch method. It was established that the marine breeze signal in the Colombian Caribbean coast is stronger during the dry season (December-March), when it reaches the highest gradients of sea-land temperature and with a predominantly diurnal component. In the city of Santa Marta and central Caribbean, the sea breeze is stronger and more defined compared to those of the cities of Riohacha at the northeast, and Barranquilla at the southwest, reaching an estimated medium value of 4 m s–1 in March, and minimum values of 2 m s–1 in August. In Barranquilla, the sea breeze signal reaches 2.5 m s–1, while in Riohacha it reaches 1.5 m s–1, both in the dry season (December-March). According to the results, the strong signal in the city of Santa Marta is related to the gradient of 3 ºC between the sea-land temperature in the dry season, while in Barranquilla is 1.2 ºC, and in Riohacha it is less than 1ºC. Despite having observed a sea-land temperature gradient close to 2.5 ºC in July in the city of Riohacha, the hodograph is not well defined, and the signal magnitude is not strong, which could be related to the presence of strong synoptic winds almost the whole year, the desert landscape of the zone, and its geographical position. This the first scientific work related to marine breeze in this region of the Caribbean, and its results constitute an important base for studying the effect that such breezes may have on the spectrum of waves, upwelling, and especially in the transport of contaminants, given that Santa Marta is one of the most important harbors of mineral coal in Colombia, and one of the main touristic destinations in the northern Colombian coast.