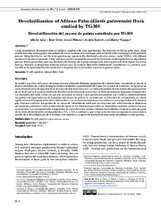 Using simultaneous thermogravimetrical analysis coupled with mass spectroscopy, the pyrolysis of African palm husk, using several heat rates and programs was performed. Seven relations of mass/charge were followed of the evolved gas of the pyrolysis process, fitting the kinetics and the mass spectroscopy signals to the distributed activation energy model (DAEM) with different numbers of pseudo-components. Fitting with four pseudo-components proved to be the best for modeling the thermal degradation process. Kinetic parameters were not affected by the heating rate or program employed, which agrees with other reports for similar biomass. Methane, methanol formaldehyde, furfural were successfully fitted to the DAEM model, nevertheless CO2 and NO2 were not able to be represented by this model due to its production in secondary reactions in gaseous phase.