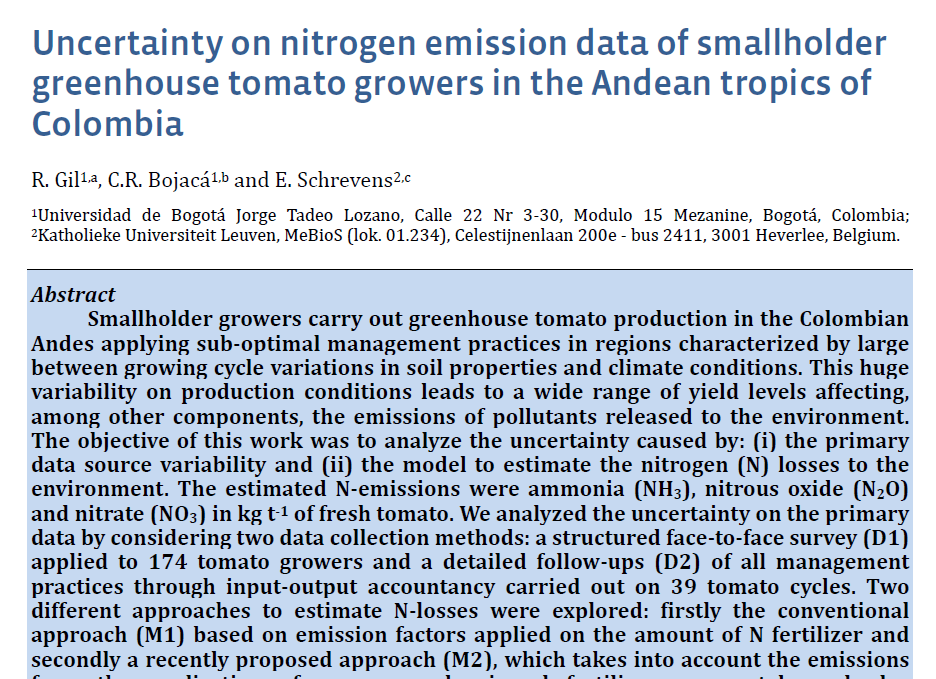 Smallholder growers carry out greenhouse tomato production in the Colombian Andes applying sub-optimal management practices in regions characterized by large between growing cycle variations in soil properties and climate conditions. This huge variability on production conditions leads to a wide range of yield levels affecting, among other components, the emissions of pollutants released to the environment. The objective of this work was to analyze the uncertainty caused by: (i) the primary data source variability and (ii) the model to estimate the nitrogen (N) losses to the environment. The estimated N-emissions were ammonia (NH3), nitrous oxide (N2O) and nitrate (NO3) in kg t-1 of fresh tomato. We analyzed the uncertainty on the primary data by considering two data collection methods: a structured face-to-face survey (D1) applied to 174 tomato growers and a detailed follow-ups (D2) of all management practices through input-output accountancy carried out on 39 tomato cycles. Two different approaches to estimate N-losses were explored: firstly the conventional approach (M1) based on emission factors applied on the amount of N fertilizer and secondly a recently proposed approach (M2), which takes into account the emissions from the application of manure and mineral fertilizers, separately and also incorporates the N released from the decomposition of crop residues and information about irrigation and N in the organic matter. According to the D1 dataset the average yield was 129.1 t ha-1 while the same parameter calculated from the D2 was 87 t ha-1. N-emissions calculated on the D1 dataset were higher than the ones based on the D2 primary data. For instance, nitrate emissions using M1 were estimated as 1.04 and 0.80 kg NO3 t-1 tomato using the D1 and D2 dataset, respectively. Regarding the models for the estimation of N-losses, the M1 approach resulted in the highest NO3 emissions (0.80 kg t-1) compared to the one obtained with the M2 approach (0.52 kg t-1), using as primary data D2. A similar trend was observed for NH3 and N2O. The results indicate that N-emissions estimation is sensible to both primary data source and the emission model used.