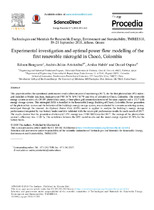 This paper describes the operational performance results after one year of monitoring (2017), for the first photovoltaic (PV) micro-grid installed in Medio San Juan, Andagoya (at 5°05’34”N 76º41’43”W and 96m of altitude) in Chocó, Colombia. The renewable energy system consists of a 20 kW photovoltaic array, a three-phase grid connection inverter of the same capacity and a 132.7 kAh energy storage system. This microgrid (MG) is installed in the Renewable Energy Building of Chocó, Colombia. Power generation of the photovoltaic system and the behavior of the building’s energy storage system, was evaluated by a remote monitoring system, developed through the internet. An Optimal Power Flow (OPF) model is applied to analyze the building’s energy storage performance (integrated by two battery banks) and it is validated with the micro-grid performance results for each month of 2017. The results showed that the generation of altern (AC) PV- energy was 23301 kWh/year for 2017. The average of the photovoltaic system’s efficiency was 11.09 %. The correlation between the OPF model results and the stored energy reported 98.79% for the battery banks.