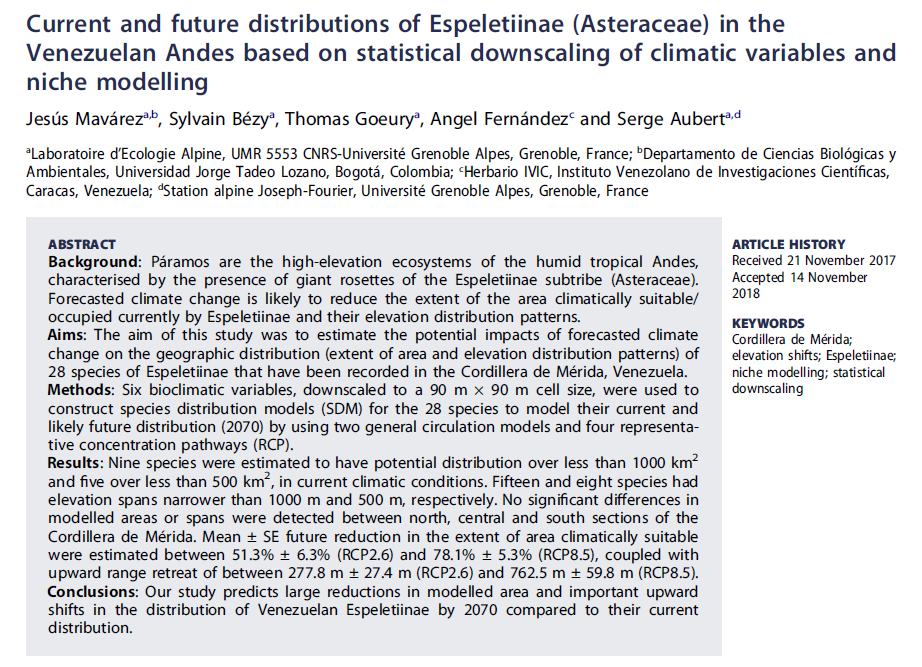 Background: Páramos are the high-elevation ecosystems of the humid tropical Andes, characterised by the presence of giant rosettes of the Espeletiinae subtribe (Asteraceae). Forecasted climate change is likely to reduce the extent of the area climatically suitable/ occupied currently by Espeletiinae and their elevation distribution patterns. Aims: The aim of this study was to estimate the potential impacts of forecasted climate change on the geographic distribution (extent of area and elevation distribution patterns) of 28 species of Espeletiinae that have been recorded in the Cordillera de Mérida, Venezuela. Methods: Six bioclimatic variables, downscaled to a 90 m × 90 m cell size, were used to construct species distribution models (SDM) for the 28 species to model their current and likely future distribution (2070) by using two general circulation models and four representative concentration pathways (RCP). Results: Nine species were estimated to have potential distribution over less than 1000 km2 and five over less than 500 km2, in current climatic conditions. Fifteen and eight species had elevation spans narrower than 1000 m and 500 m, respectively. No significant differences in modelled areas or spans were detected between north, central and south sections of the Cordillera de Mérida. Mean ± SE future reduction in the extent of area climatically suitable were estimated between 51.3% ± 6.3% (RCP2.6) and 78.1% ± 5.3% (RCP8.5), coupled with upward range retreat of between 277.8 m ± 27.4 m (RCP2.6) and 762.5 m ± 59.8 m (RCP8.5). Conclusions: Our study predicts large reductions in modelled area and important upward shifts in the distribution of Venezuelan Espeletiinae by 2070 compared to their current distribution.