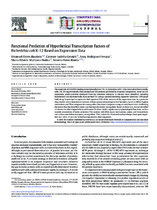 The repertoire of 304DNA-binding transcription factors (TFs) in Escherichia coli K-12 has been described recently, with 196 TFs experimentally characterized and 108 proteins predicted by sequence comparisons. Based on 303 expression profile patterns retrieved from the Colombos database 12 clusters were identified, including hypothetical and experimentally characterized TFs, using a spectral clustering algorithm based on a 3NN graph built using 14 principal components that represent 65% of the variance of the expression data. In a posterior step, clusters were characterized in terms of their associated overrepresented functions, based on KEGG, Supfam annotations and Pfam assignments among other functional categories using an enrichment test, reinforcing the notion that the identified clusters are functionally similar among them. Based on these data, the we identified 12 clusters in which hypothetical and known TFs share similar regulatory and physiological functions, such as module associations of toxin-antitoxin (TA) systems with DNA repair mechanisms, amino acid biosynthesis, and carbon metabolism/transport, among others. This analysis has increased our knowledge about gene regulation in E. coli K-12 and can be further expanded to other organisms