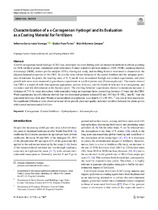 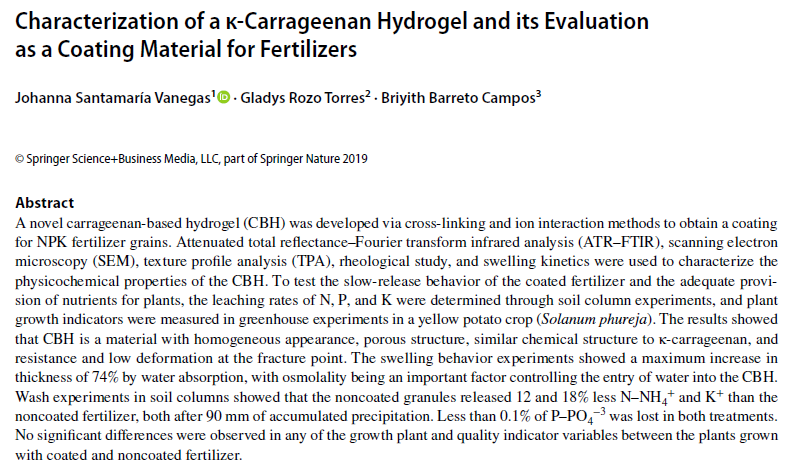 novel carrageenan-based hydrogel (CBH) was developed via cross-linking and ion interaction methods to obtain a coating for NPK fertilizer grains. Attenuated total reflectance–Fourier transform infrared analysis (ATR–FTIR), scanning electron microscopy (SEM), texture profile analysis (TPA), rheological study, and swelling kinetics were used to characterize the physicochemical properties of the CBH. To test the slow-release behavior of the coated fertilizer and the adequate provision of nutrients for plants, the leaching rates of N, P, and K were determined through soil column experiments, and plant growth indicators were measured in greenhouse experiments in a yellow potato crop (Solanum phureja). The results showed that CBH is a material with homogeneous appearance, porous structure, similar chemical structure to κ-carrageenan, and resistance and low deformation at the fracture point. The swelling behavior experiments showed a maximum increase in thickness of 74% by water absorption, with osmolality being an important factor controlling the entry of water into the CBH. Wash experiments in soil columns showed that the noncoated granules released 12 and 18% less N–NH4 + and K+ than the noncoated fertilizer, both after 90 mm of accumulated precipitation. Less than 0.1% of P–PO4 −3 was lost in both treatments. No significant differences were observed in any of the growth plant and quality indicator variables between the plants grown with coated and noncoated fertilizer.