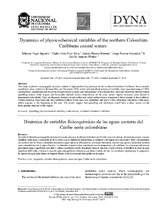 This study explored oceanographic dynamics related to high productivity processes in the northern Colombian Caribbean. Four scientific expeditions were carried out between May and December 2018, where selected physicochemical variables were measured using a CTDO (conductivity, temperature and dissolved oxygen sensor system), and transparency with a Secchi disc. May and December showed typical upwelling waters, while August and November showed waters characteristic of the rainy season. Spatial dynamics were related to temperature and salinity. Thus, northeastern stations showed colder and saltier surface waters compared to those located to the southwest. Vertical readings were taken and the Caribbean Surface Water mass was identified, and below it the subtropical subsurface water mass, which emerges at the beginning of the year. The results suggest that upwelling and freshwater runoff have a direct impact on the hydrographic structure of the region.