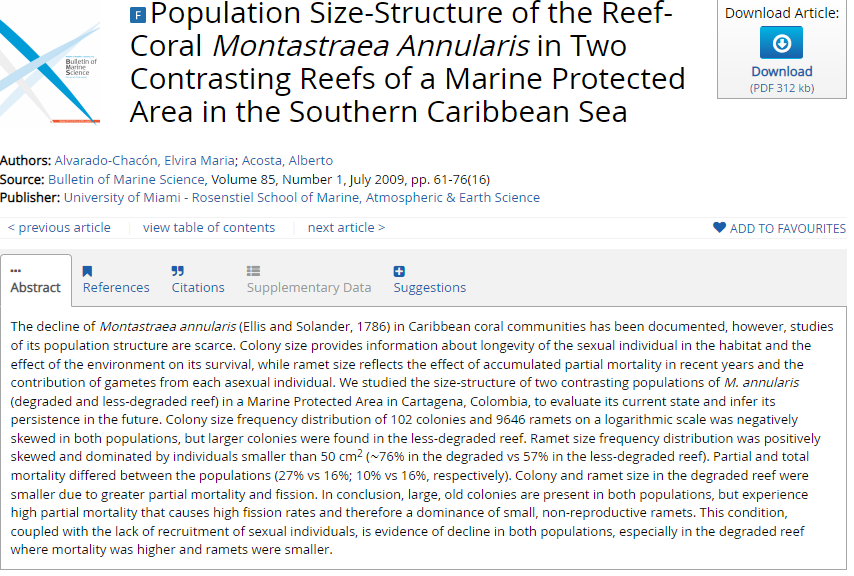 The decline of Montastraea annularis (Ellis and Solander, 1786) in Caribbean coral communities has been documented, however, studies of its population structure are scarce. Colony size provides information about longevity of the sexual individual in the habitat and the effect of the environment on its survival, while ramet size reflects the effect of accumulated partial mortality in recent years and the contribution of gametes from each asexual individual. We studied the size-structure of two contrasting populations of M. annularis (degraded and less-degraded reef) in a Marine Protected Area in Cartagena, Colombia, to evaluate its current state and infer its persistence in the future. Colony size frequency distribution of 102 colonies and 9646 ramets on a logarithmic scale was negatively skewed in both populations, but larger colonies were found in the less-degraded reef. Ramet size frequency distribution was positively skewed and dominated by individuals smaller than 50 cm2 (∼76% in the degraded vs 57% in the less-degraded reef). Partial and total mortality differed between the populations (27% vs 16%; 10% vs 16%, respectively). Colony and ramet size in the degraded reef were smaller due to greater partial mortality and fission. In conclusion, large, old colonies are present in both populations, but experience high partial mortality that causes high fission rates and therefore a dominance of small, non-reproductive ramets. This condition, coupled with the lack of recruitment of sexual individuals, is evidence of decline in both populations, especially in the degraded reef where mortality was higher and ramets were smaller.