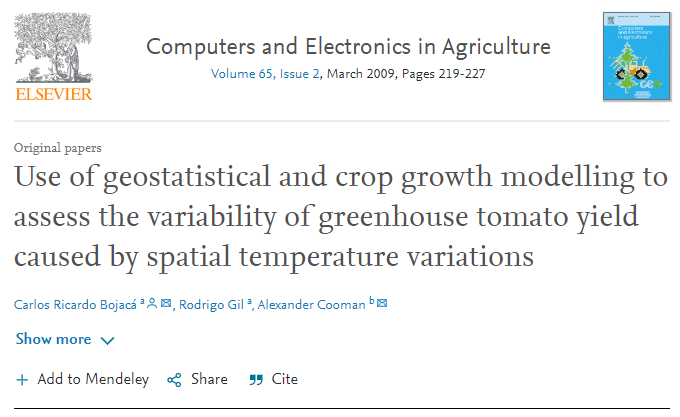 Users of potential crop growth models have generally assumed homogenous greenhouse climate conditions for simulation purposes. Geostatistics offers the possibility to represent the spatial dependence of climate variables such as temperature distribution in greenhouses. In order to obtain insight in the relevance of temperature distribution on the performance of a crop, geostatistical and crop growth modeling tools were combined in the present work. A plastic greenhouse with the size used in commercial practices, was used to assess temperature distribution by installing a 25-sensor grid, during a 28-day measurement period. Geostatistical analyses were performed on the temperature data, previously divided in five ranges that were established as a function of solar radiation intensity. Estimated semivariograms were fitted to theoretical spherical model for posterior estimation at unsampled points by ordinary kriging method. Results of this analysis indicated an increasing temperature spatial dependence as global radiation augmented. Crop growth simulations with the Tomgro model applied to the estimated temperature distribution, quantified the faster plant development rates in the central zone of the greenhouse, resulting in plants with one additional truss and a significant higher yield, when compared to plants next to the side walls. The results of this work suggest that the location of the climate sensor station is a sensible factor when using crop simulation models for greenhouse conditions. Final predictions done by crop growth simulation models may be biased and the results cannot be generalized for the entire greenhouse area when microclimate patterns are not considered. Application of geostatistics enabled to assess temperature patterns inside greenhouse and to analyze the relationship with global outside radiation.