Development of a composite material between bacterial cellulose and E crassipes, for the treatment of water contaminated by chromium (VI) 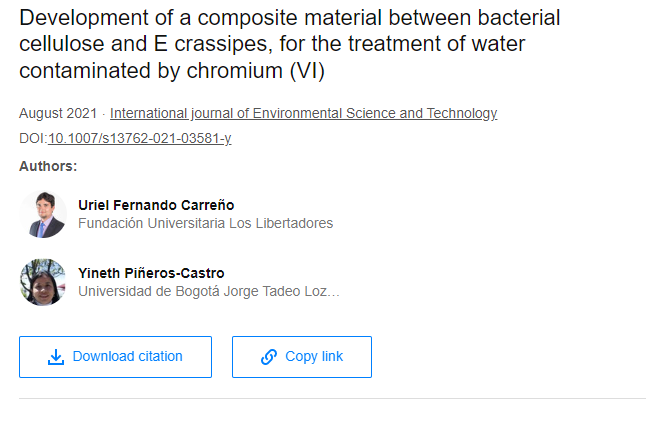 In recent years, chromium water pollution has become a serious problem for aquatic environments as rivers and wetlands, and for human health. Many researchers are working on finding economic and efficient ways to solve this issue, with the objective of mitigating the damaging effluents of the industries, as in the case of the dumping of chromium. In this study, the removal of chromium (VI) by plant cellulose and bacterial cellulose was evaluated. An experiment was carried out with different initial concentrations of chromium, evaluating the ability to eliminate and adsorb this contaminant by means of biomass of E crassipes, bacterial cellulose, and the union of these two biomasses, determining which is the best biomass. Different design variables such as characterizations of biomasses, adsorption kinetics, adsorption capacities through Langmuir isotherms, pH influence, and desorption-adsorption capacities of each of these biomasses were evaluated. Concluding that the capacity of bacterial cellulose (BC) is 47 mg/g, the capacity between bacterial cellulose and E crassipes cellulose (EC + BC) is 28 mg/g and the cellulose of E crassipes (EC) is 10 mg/g. However, with the biomass of EC was given five processes of treatment more due to the power of elution that had the HCl about the Cr (VI) adhered in this biomass. But with the biomass of BC, the HCl had not the same result of elutions and alone had one treatment of Cr (VI).