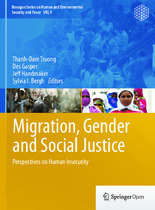 This book emerges from a collaborative effort between partners from Africa, Asia, Europe, and Latin America, funded by the International Development Research Centre (IDRC). The empirical data of the book originate mostly from the IDRC research programme on Women and Migration (2006–2011) that was funded as a component of the larger Women’s Rights and Citizenship programme (WRC). Whereas previous support for research on gender by IDRC has been integrated into broader themes such as agriculture, health, social and economic policy, science and technology, the WRC programme has used the concept of citizenship as an entry point and sought to bring Southern voices more fully into current international debates in the field of gender and development. Built on the vision of a just world where women in the South are acknowledged to have a sense of self that is connected to the ideals of citizenship, the WRC programme has supported work directed at undoing social discrimination based on gender and enabling the realization of the full range of rights and freedoms for women.