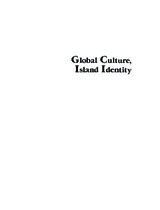 Looking at the development of cultural identity in the global context, this text uses the approach of historical anthropology. It examines the way in which the West Indian Community of Nevis, has, since the 1600s, incorporated both African and European cultural elements into the framework of social life, to create an Afro-Caribbean culture that was distinctive and yet geographically unbounded - a "global culture". The book takes as its point of departure the processes of cultural interaction and reflectivity. It argues that the study of cultural continuity should be guided by the notion of cultural complexity involving the continuous constitution, development and assertion of culture. It emphasizes the interplay between local and global cultures, and examines the importance of cultural display for peoples who have experienced the process of socioeconomic marginalization in the Western world.