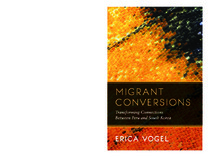 "Peruvian migrant workers began arriving in South Korea in large numbers in the mid-1990s, eventually becoming one of the largest groups of non-Asians in the country. Migrant Conversions shows how despite facing unstable income and legal exclusion, migrants have come to see Korea as an ideal destination, sometimes even as part of their divine destiny. Faced with a forced end to their residence in Korea, Peruvians have developed strategies to transform themselves from economic migrants into heads of successful transnational families, influential church leaders, and cosmopolitan travelers. Set against the backdrop of the 2008 global financial crisis, Migrant Conversions explores the intersections of three types of conversions—monetary, religious, and cosmopolitan—to argue that migrants use conversions to negotiate the meaning of their lives in a constantly changing transnational context. As Peruvians carve out social spaces, they create complex and uneven connections between Peru and Korea that challenge a global hierarchy of nations and migrants. Exploring how migrants, churches, and nations change through processes of conversion reveals how globalization continues to impact people’s lives and ideas about their futures and pasts long after they have stopped moving or after a particular global moment has come to an end. “A model of what transnational ethnographic research can accomplish.” ELEANA J. KIM, author of Adopted Territory: Transnational Korean Adoptees and the Politics of Belonging “With crisp prose and candid presence throughout the text, Vogel gives us the first book-length study of the experiences of non-Asian migrants in South Korea.” CAREN FREEMAN, author of Making and Faking Kinship: Marriage and Labor Migration between China and South Korea ERICA VOGEL is Associate Professor of Anthropology at Saddleback College."