All in the mix : Race, class and school choice 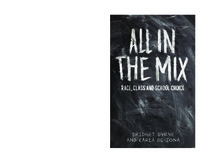 It’s an open evening in the new building of an academy high school in a southern suburb of Manchester on a blustery autumn evening. There are lots of parents and children who have come to check out the school. There is a busy, but ordered feel. Parents and children give out a nervous excitement about their possible future school. We’re greeted by staff in the reception and assigned a pupil guide to take us around in small groups. Along with a mother and son, we are led around the classrooms, to see the different subject rooms, perhaps play games on iPads, look at displays, chat to the subject teachers and look at books laid out on tables. As with other school open evenings we’ve been to, the pupil guide, a year 7 student, is impressively polite, friendly and articulate about the school. He’s ready to sell his school, which he clearly feels proud of. He’s only been in the school for a term and is happy to show off his newly acquired knowledge about it. Sometimes the things he sees as advantages may ‘misfire’, such as the presence of CCTV cameras in corridors and stairways – he likes them, but for a potential parent it may seem like oppressive surveillance or raise worrying questions about what would go on if the cameras were not there. But nonetheless, he’s a good salesperson – the kind of child that many parents would want their child to be friends with and to be. We have been to several of the local open days as part of this research project, interested in how the schools are presenting themselves to prospective parents and children. Yet the thing that captivates us in this visit is the boy whom we’re being taken around with. He is absolutely silent, asking no questions, leaving that to his mother and not seeming to really listen to the conversations. Yet he is looking intently around him, his hand gently, tentatively, touching the objects he sees, constantly tracing an invisible line along walls, across tables, over books. He seems to be engaged in an intense act of imagining.