Vibrant Architecture. Matter as a CoDesigner of Living Structures 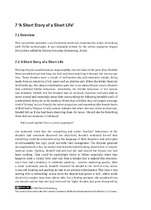 The tiny droplet crawled almost imperceptibly over the base of the petri dish. Rendell Stone wondered just how long she had now been watching it through the microscope lens. These droplets were a couple of millimetres big and extremely simple, being made from an emulsion of oil, water and an alkaline salt. When the initial chemical field broke up, this simple combination gave rise to an extraordinary result: droplets that exhibited lifelike behaviour. Admittedly, the lifelike behaviour of the system was relatively limited, but the droplets had an uncanny character and were able to move around and seemingly sense their surroundings by following invisible trails of unidentified chemicals in the medium. When they collided, they exchanged a strange kind of ‘kissing’ action. Usually the rather gregarious and somewhat affectionate beads of fluid had a lifespan of only several minutes but when she was at the microscope, Rendell felt as if she had been observing them for hours. Should she be disturbing these delicate moments of intimacy?