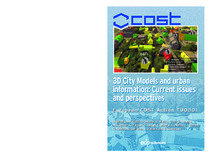 3D City Models and urban information: Current issues and perspectivesEuropean COST Action TU0801R. Billen, A.-F. Cutting-Decelle, O. Marina, J.-P. de Almeida, Caglioni M., G. Falquet, T. Leduc, C. Métral, G. Moreau, J. Perret, G. Rabin, R. San Jose, I. Yatskiv and S. ZlatanovaConsidering sustainable development of cities implies investigating cities in a holistic way taking into account many interrelations between various urban or environmental issues. 3D city models are increasingly used in different cities and countries for an intended wide range of applications beyond mere visualization. Could these 3D City models be used to integrate urban and environmental knowledge? How could they be improved to fulfill such role? We believe that enriching the semantics of current 3D city models, would extend their functionality and usability; therefore, they could serve as integration platforms of the knowledge related to urban and environmental issues allowing a huge and significant improvement of city sustainable management and development. But which elements need to be added to 3D city models? What are the most efficient ways to realize such improvement / enrichment? How to evaluate the usability of these improved 3D city models?These were the questions tackled by the COST Action TU0801 “Semantic enrichment of 3D city models for sustainable urban development”. This book gathers various materials developed all along the four year of the Action and the significant breakthroughs.