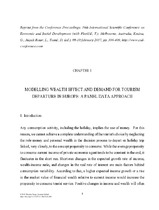 Any consumption activity, including the holiday, implies the use of money. For this reason, we cannot achieve a complete understanding of the tourist's choice by neglecting the role money and personal wealth in the decision process to depart on holiday trip linked, very closely, to the concept propensity to consume. While the average propensity to consume current income of private economic agent tends to be constant in the end, it fluctuates in the short run. Short-run changes in the expected growth rate of income, wealth-income ratio, and changes in the real rate of interest are main factors behind consumption variability. According to that, a higher expected income growth or a rise in the market value of financial wealth relative to current income would increase the propensity to consume tourist service. Positive changes in income and wealth will often go hand-in-hand, since a higher expected income growth is likely to drive up the market prices of stocks, owner-occupied housing, thereby increasing stock of real financial wealth, because a higher expected growth rate will tend to raise future corporate dividends and to drive up demand for housing, travelling abroad etc. Outbound tourism is considered a luxury good that carries certain prestige to the some part of people or encompassed nations in our analysis. However, another stream of studies on consumption argues that current earnings alone do not sufficiently explain consumers’ spending behaviours. Expecting an increase in future income can also stimulate consumption of goods (Campbell and Cocco, 2007). This conjecture allows us to study how the tourist’s choice is affected by changes in the income.