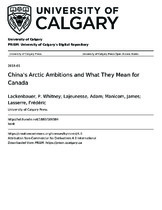 Increasingly, the world is turning its attention northward, with many players far removed from the region itself seeking a role and in some cases calling into question the governance of the Arctic. While many of these players could have a contribution to make in the development of the North, Canada does not accept the premise that the Arctic requires a fundamentally new governance structure or legal framework. Nor does Canada accept that the Arctic nation states are unable to appropriately manage the North as it undergoes fundamental change. The statement reiterates that an extensive international legal framework applies to the Arctic Ocean, but that new challenges will emerge alongside increased shipping, tourism, and economic development. Placing a clear priority on “regional solutions, supported by robust domestic legislation in Arctic states,” Canada emphasizes collaboration with “other Arctic nations through the Arctic Council (the primary forum for collaboration among the eight Arctic states), with the five Arctic Ocean coastal states (on issues of particular relevance to the Arctic Ocean), and bilaterally with key Arctic partners particularly the United States.”