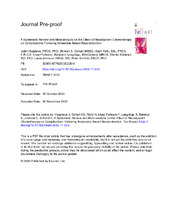 Background The impact of neoadjuvant chemotherapy (NACT) on surgical outcomes following immediate breast reconstruction (IBR) remains unclear. While it is generally considered safe practice to perform an IBR post NACT, reported complication rates in published data are highly variable with the majority of studies including fewer than 50 patients in the NACT and IBR arm. To evaluate this further, we conducted a systematic review and meta-analysis on the effect of NACT on autologous and implant based immediate breast reconstructions. We aimed to assess for differences in the post-operative course following IBR between patients who received NACT with those who did not. Methods PubMed, EMBASE, and Cochrane Library were searched from 1995 to Sept 2, 2020 to identify articles that assessed the impact of NACT on IBR. All included studies assessed outcomes following IBR. Only studies comparing reconstructed patients receiving NACT to a control group of women who did not receive NACT were included. Unadjusted relative risk of outcomes between patients who received or did not receive NACT were synthesized using a fixed-effect meta-analysis. The evidence was assessed using the Newcastle Ottawa Scale scores and GRADE. Primary effect measures were risk ratios (RRs) with 95% confidence intervals. Results A total 17 studies comprising 3249 patients were included in the meta-analyses. Overall, NACT did not increase the risk of complications after immediate breast reconstructions (risk ratio [RR]: 0.91, 95% CI 0.74 to 1.11, p=0.34). There was a moderate, but not significant, increase in flap loss following NACT compared with controls (RR: 1.23, 95% CI 0.70 to 2.18, p=0.47; I 2 =0%). Most notably, there was a statistically significant increase in implant/expander loss after NACT ( RR: 1.54, 95% CI 1.04 to 2.29, p = 0.03; I 2 =34%). NACT was not shown to significantly increase the incidence of hematomas, seromas or wound complications, or result in a significant delay to commencing adjuvant therapy (RR: 1.59, 95% CI 0.66 to 3.87, p =0.30). Conclusion Immediate breast reconstruction after NACT is a safe procedure with an acceptable post-operative complication profile. It may result in a slight increase in implant loss rates, but it does not delay commencing adjuvant therapy.