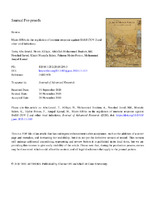 Background: Micro-RNAs (miRNAS) are non-coding, small RNAs that have essential roles in different biological processes through silencing genes, they consist of 18-24 nucleotide length RNA molecules. Recently, miRNAs have been viewed as important modulators of viral infections they can function as suppressors of gene expression by targeting cellular or viral RNAs during infection. Aim of Review: We describe the biological roles and effects of miRNAs on SARS-CoV-2 lifecycle and pathogenicity, and we discuss the modulation of the immune system with micro-RNAs which would serve as a new foundation for the treatment of SARS-COV2 and other viral infections. Key Scientific Concepts of Review: miRNAs are the key players that regulate the expression of the gene in the post-transcriptional phase and have important effects on viral infections, thus are potential targets in the development of novel therapeutics for the treatment of viral infections. Besides, micro-RNAs (miRNAs) modulation of immune-pathogenesis responses to viral infection is one of the most-known indirect effects, which leads to suppressing of the interferon (IFN-α/β) signalling cascade or upregulation of the IFN-α/β production another IFN-stimulated gene (ISGs) that inhibit replication of the virus. These virus-mediated alterations in miRNA levels lead to an environment that might be either enhance or inhibit virus replication.