Theory-based motives for the impasse in counterspace weapons regulation 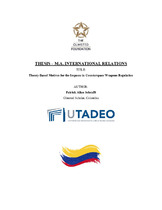 Taking into account the profound global utility of near-earth space, and the increasing threat posed to it by orbital debris, this thesis attempts to explain why a seemingly well-established system of international governance has failed to deter the testing, and genuine considerations for operational employment, of counterspace (CS) weapons. In doing so, it seeks to identify motives based in fundamental international relations (IR) theory. While recognizing the criticality of a U.S. commitment to any effective CS weapons regulation, it is hypothesized that the nation’s well-established opposition to such legislation can be explained using constructivist principles. Structure is added through the application of specific research objectives (SROs). These include describing the physical and operational complexities of the space environment, the nature of CS weapons and their employment considerations, and the orbital debris problem (SRO 1), conducting an analysis of applicable IR forums, existing international space law, and pertinent historical events as they pertain to shaping modern foreign policy positions (SRO 2), and formulating realistic proposals for advancing the conduct of responsible behavior in space by curtailing the employment of CS weapons (SRO 3). While the pursuit of SRO 1 provides context, SRO 2 directly addresses the research question. A review of regulatory instruments confirms their inadequacy in providing enforceable guidelines. However, it also establishes that normative standards of behavior have been explicitly defined. A subsequent analysis of recent events indicates a blatant disregard for these standards by Russia and China, validating modern U.S. policy and strategy positions. From a constructivist point of view, this partially validates the research hypothesis. Aspects of realist theory, specifically Power Transition Theory, are also necessary to account for the actions of Russia and China as strategic competitors. Finally, in addressing SRO 3 the thesis provides a starting point for subsequent research and debate.