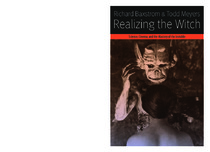 In 1932 the writer Roberto Arlt described the chal- lenge facing Communist organizers in Argentina: ‘‘Out of 100 proletarians, 90 have never heard of Karl Marx, but 90 can tell you how Rudolph Valentino used to kiss and what kind of mustache [the Holly- wood actor] José Mojica wears.’’∞ Arlt’s pessimism regarding the revolutionary potential of the nation’s workers was prescient. To the immense disappoint- ment of a generation of leftist intellectuals, the large majority of the Argentine working class would reject Socialist and Communist parties, embracing instead the populist movement built by Juan and Eva Perón in the mid-1940s. But more illuminating than Arlt’s assessment of working-class consciousness is his reference to the movies. Arlt recognized not only that workers made up a substantial proportion of the audience for mass culture in Argentina, but also that the mass culture they consumed must have had a significant impact on their consciousness, one po- tentially as decisive as their experience of exploita- tion or their participation in class struggle.