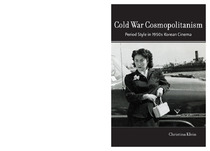 I will never forget the first time I saw Madame Freedom (1956). I was supposed to be working on a book about contemporary Asian cinema and its relationship to Hollywood and was in the midst of what I expected to be a brief detour into postwar South Korean cinema. I had come across references to Madame Freedom as the most famous Korean film of the 1950s and had decided it was time to see it for myself. That was how I found myself sitting in front of an old TV in a small, cold, and dusty room deep in the stacks of the Harvard-Yenching Library. I felt a bit out of place. As an American studies scholar, I was unfamiliar with the layout and protocols of this library, which houses the university’s Asian studies collection, and I couldn’t decipher the titles of the books on the shelves as I walked by. My feelings of out-of-placeness dissipated as I watched the film, however, transformed into what can only be described as joy. Madame Freedom is a fabulous film. A contemporary melodrama, it tells the story of a middle-class housewife who, after taking a job in a luxury Western goods shop, abandons her domestic duties and begins spending her time in public places of leisure, ultimately entering into an affair with a married man. As I watched, I was captivated by an overwhelming sense of familiarity combined with a curiosity-piquing sense of difference. The film was generically recognizable as a women’s picture, and its discontented heroine was kin to the unhappy wives and mothers in Hollywood films such as Beyond the Forest (1949) and The Reckless Moment (1949). It was the film’s style, however, that stood out to me. I was struck by director Han Hyung-mo’s mastery of classical Hollywood conventions: the confidence of his analytical editing, the boldness of his moving camera, the density of the film’s mise-en-scène, and the abundance of its music.