Filming politics : communism and the portrayal of the working class at the national film board of Canada, 1939-46 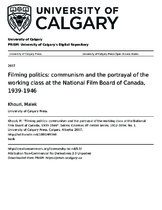 My first rendezvous with Canadian cinema was in the late 1970s and early 1980s as a young immigrant arriving in Canada from war-torn Lebanon. I remember taking two courses on Canadian film at York University, both of which gave me the impression that this cinema only began to materialize sometime in the 1970s with the making of films like Goin’ Down the Road, Paperback Hero, and Mon Uncle Antoine, along with several others. Of course, there were occasional references to a John Grierson and an NFB (National Film Board of Canada), but I do not recall any substantive talk on a serious Canadian cinema that existed before the making of these celebrated films. As a young film enthusiast in Sidon, a coastline city on the eastern Mediterranean, I had the privilege of sampling all kinds of films, including some shown in local cultural clubs and libraries. This allowed me to view and appreciate documentary films at a relatively young age. Frequently, this also gave me the opportunity to linger after the screenings to listen to some very heated discussions about the films and their social and political significance. Within a setting engulfed in political strife and a Middle East in constant turmoil, to be directly engaged in politics was part of life, even for a well-pampered middle-class kid like myself. As a result, appreciating how politics unswervingly impacted culture and how culture impacted politics came to me as part of a natural learning process and experience. This politically charged background, however, put me in an awkward position once I began to study film in a Canadian university setting.