Creativity and science in contemporary argentine literature : between romanticism and formalism 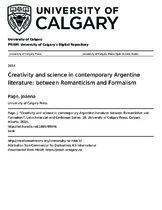 In British and North American literature since the 1960s, models and the- ories from mathematics and science – incompleteness, uncertainty, entropy, chaos, and complexity – have most often been put to use in forging apoca- lyptic visions of social and cultural decay or of an incomprehensible universe that lies beyond the limits of our science. These theories seem to speak to a postmodern skepticism concerning any genuine advance in knowledge and, at the same time, any possibility of artistic regeneration. They have lent force to the postmodern sense of an ending, or impasse, bringing to a halt the drive of modernist progress towards greater knowledge, freedom, and creativity. This is the vision assembled in the fiction of Thomas Pynchon and J. G. Ballard, for example, in which the uncertainty principle renders futile all human efforts to understand the unhomely universe in which we are trapped, and the thermodynamic process of entropy seems to command an inexorable decline in every area of psychological, social, and cultural experience.