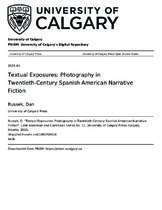 This book explores the relationship between twentieth-century Latin American narrative fiction and the photographic medium. It probes the ways in which literature registers photography’s powers and limitations, and how authors elaborate its conventions and assumptions in fictional form. While this is essentially a study of literary criticism, it aims to show how texts critically reflect the media environment in which they are created. The writings I analyze enter a dialogical relationship with visual technologies such as the X-ray, cinema, illustrated journalism, television, and video. This book examines how these technologies, historically and aesthetically linked to photography, inform the works of canonical writers in Spanish America. Photography holds a special status in the array of modern technologies of representation. From a conventional rubric that defines it as a technique through which a sensitized material surface is exposed to light and developed through mechanical means to produce a picture of whatever is placed in front of the camera, the medium has evolved into a hybrid, protean, multipurpose application.1 While on many occasions writers have taken photography’s conventional definition for granted, on others they have challenged, transgressed, and transcended it.