African markets and the Utu-ubuntu business model : a perspective on economic informality in Nairobi 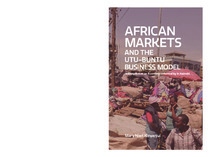 I wrote this book to try to resolve some of the contradictions I have experienced as a student, a practitioner and also a subject of economic informality, urbanisation and development. As a student of development in the 1980s and 1990s, I was exposed to Karl Polanyi’s idea that development involves a ‘great transformation’ of social, cultural and economic ways of life, and that this is brought about through the establishment of self-regulating markets, the entrenchment of a money culture and the adoption of a new religion and formal education. Apparently, in Africa, the first steps towards this transformation were taken during the colonial period and further progress is being made by postcolonial states via the neoliberal policies they have since adopted. I also learned that African culture presents certain obstacles to this transformation process. Punitive attitudes towards gender apparently prevent women from participating fully in economic activities while the fact that individualism and competition are generally discouraged supposedly suppresses entrepreneurship and innovation. So, to benefit from the great transformation, Africans are often advised to adopt the individualist mindset that will allow them to embrace economic competition, self-regulating markets, as well as new farming methods.