How best to ‘go on’? prospects for a ‘modern synthesis’ in the sciences of mind 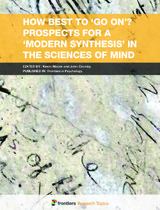 For some time, conceptual unity in psychology has been seen as both a scientific “holy grail” and a feared hegemonic project—see, for example Observer (1982), Kantor (1984), and Dixon (1983). This may be because a focus on integration, perhaps paradoxically, may intensify various tensions within a psychology whose sub-disciplinary constitution actually reflects fault lines and dualisms in the organization of knowledge more generally. In recent years, we have seen new areas of theory and methods, including enactivism, embodied cognition, discursive psychology, second-person neuroscience, developmental systems theories, and a stunning growth in the neurosciences, genetics, and epigenetics. Our contributors explore whether such advances have helped synthesize the diverse understandings of mind within psychology. In so doing they frequently emphasize the unifying prospects of dynamic, adaptive, action-orientated, “socialized,” systems-based, and embodied approaches, and are correspondingly critical of reductionist, mechanistic approaches. The articles are of two kinds. The first deals directly with the integration of the sciences of mind and cognition as a broad project (Marshall; Stam; Andringa et al.). The second focuses on prospects for synthesis within specific contexts of theory, method, and practice, including reciprocity (Berra) psychiatric theory, and diagnosis (Castiglioni and Laudisa; Di Francesco and Marraffa) methods for investigating consciousness (Olivares et al.); theories of vision (Laurent) and argumentation (Lillo-Unglaube et al.). Marshall’s proposal concerns relationships between “levels” in psychological understanding, arguing that combining an embodied approach with a developmental systems account, within a relational worldview, overcomes the conceptual “splitting off ” of mind from brain and body. He highlights the vital role that “pattern explanation” (akin to Aristotle’s formal cause) has in a relational developmental systems approach, because it allows increased conceptual clarity over the relations between a system’s organization and its activity and thus avoids reductionism. With a similar focus on the integration of levels of explanation, Di Francesco and Marraffa consider the relationship between consciousness (personal level) and the unconscious (sub- personal level). They argue that, contra an eliminativist perspective, some personal level concepts such as “motivation” and “attachment” can, in dialectical relationship with neuroscientific findings, provide a useful indication of how personal and sub-personal levels of explanation can operate together.